Some if not most of best diving sites have presence of tidal currents, even our local sites are not spared. Ironically, strong currents produces reef productivity – an active fish life and colorful environment. Abundance of planktons is common which attracts fish, leaving a thriving reef. So even with strong currents, intrepid divers risk for these sites not for crazy adventure but because most often than not, diving in these conditions are richly rewarding and exhilarating, the indescribable beauty and grandeur of marine life is commonly in store.

I had my own share of these experiences, though if I had a choice I would normally avoid such conditions for safety. Diving with men often lead in such situation, few years back I was diving in Samal Island with my DM and foreign national at White Rock and I was kicking hard but wasn’t moving. A sudden surge of fear when I found no one ahead of me, all of them drifted without my knowing. Mushroom Rock was with stronger currents, we all went down straight flat on seabed holding on reefs until we all drifted away together, I was keeping an eye with my DM, I couldn’t afford to be separated! I was overly conscious of the current and I must admit I failed to fully appreciate the richness of the site. 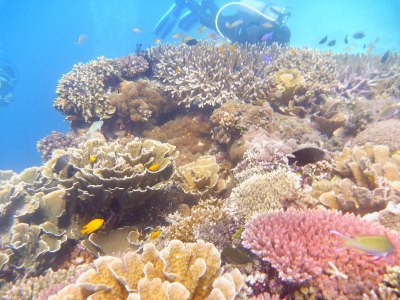 The sound of “Hole in the Wall” rings a bell in my mind while we were in Puerto Galera like three years back, I suggested exploring the site with my dive buddy. Well, it was like flying as we dropped at Escarceo Point, racing past corals until I was sucked in at the Hole! It was a surprise! Tawi-Tawi’s mysterious depths are laden with currents, so there was no choice as we explored it last year. It was swooshing and unforgiving, we were prepared though and I thought it could have been better if we have reef hooks to steady us as we viewed and observed the plane wreck surrounded with marine life. Planning, preparation, sufficient gears and familiarity of guide or dive master on the site is important.

Indeed, diving in currents is hugely rewarding, But, can also be stressful, and, if not prepared, divers can easily find themselves in dangerous situations. It’s important to know what to expect, and how to prevent risks from becoming reality.

Here are a few tips I found at http://www.scubadiverlife.com contributed by Ms. Jessica Vyvyan-Robinson which can be helpful for making the most of your dives the next time you decide to enter the fray.

Planning and Briefing
One of the most essential steps for creating a positive dive in strong current is planning. This includes understanding the type of current you may encounter, listening closely to the briefing before a dive and making sure that all members of the group know what to do if things go wrong. A comprehensive dive briefing should be given and strictly adhered to, detailing how the group will descend and ascend, how any issues will be dealt with, and what can be expected throughout the dive. It is important that divers know what to do in case of separation, since this is one of the most common problems of diving in strong current and happens most frequently during descent and ascent.

Decide If You’re Going With or Against the Current
Especially when dealing with exceptionally strong currents, it is advisable to conduct your dive as a drift dive in order to preserve energy. It is imperative that the boat is able to follow your progress in order to provide support and a pickup at the end of the dive, so the dive leader should carry either an SMB or a delayed SMB, and it would be wise for each member of the group to also carry a delayed SMB in case of separation. To ensure that the boat is able to find you once you have resurfaced, it is also a good idea to carry either an audible or a visual signaling device (i.e. a whistle or dive mirror). If you find yourself separated from the group on a drift dive, surface at a safe speed but without delay — the further away from the group, and therefore the boat, you will drift the longer you spend underwater. Those diving with a delayed SMB should deploy them on beginning the ascent to give surface support a head start on locating your position.

If a drift dive is not possible, always begin the dive swimming against the current; swim back to the ascent point with the current is easier for tired divers. Plan your dive carefully according to the speed of the current, and choose a turn-around point with divers’ air consumption rate in mind. A good rule of thumb is to turn around once a third of your air supply has been used.

Keep Low, Get Streamlined and Weight Correctly
As a general rule, most currents are stronger at the surface and in mid-water. When swimming against a current keep close to the seafloor, where the shape of the reef breaks the current’s flow and causes it to slow. Sometimes it’s possible to find temporary shelter from a strong current in the lee of large objects, like coral outcrops, pinnacles or shipwrecks. Streamlining one’s gear is also an important part of diving in strong current; dangling gauges and accessories cause unnecessary drag, and can cause a dangerous situation if they become entangled while moving over the reef at speed.

It is important that divers are correctly weighted when diving in strong current; too little and a quick descent can become impossible, while being over-weighted can hinder streamlining and efficient swimming position once underwater. In order to conserve energy while swimming in current, divers should aim to maintain a horizontal position in the water, minimizing the resistance of the oncoming current.

Decide What Gear to Take
Inexperienced divers should consider leaving unnecessary items like large underwater cameras, video cameras and torches behind when diving strong currents for the first time. These items not only interfere with buoyancy and cause additional drag, but trying to operate them while also dealing with the current can lead to additional stress and even panic via task-loading.

On the other hand, there are several pieces of equipment that may not be part of your regular kit that can greatly ease the stresses created by strong currents. In addition to the compulsory surface marker device (whether an SMB or a delayed SMB), divers may choose to equip themselves with a reef hook or a buddy line to prevent separation. The former piece of equipment allows divers to attach themselves to the reef via a blunt hook wedged in a rock crevice or similar cavity, stopping their progress and allowing them to wait for other divers, catch their breath or keep their hands free for taking photos. However, it is important that the reef hook is only used in areas where there is no coral, or where the coral is already dead. Dive boats may have a tag line, which extends from the boat’s stern and allows divers to hold on while waiting to exit the water after ascent.

Final Considerations
Because diving in currents can be strenuous, it is important to check your gauges with more regularity than you might on a normal dive. Swimming against a current can lead to overexertion, and therefore significantly increase your air consumption.

Similarly, if you’re caught in a down current, keep a constant eye on your depth, and when the current releases you, on your ascent rate. You cannot fight a down current — remain calm and wait for it to level out. Inflate your BCD to counter the current’s downwards pull, but be prepared to let air out immediately once you are free of it to prevent a rapid and uncontrolled ascent.

Be wary of swimming too close to the shallows when in strong current, especially near a rocky outcropping, pinnacle, reef wall or wreck. The current will be especially strong here and you may find yourself suddenly caught by an upwelling and unable to stop your ascent. In this situation, dump the air from your BCD immediately (remembering to use your dump valves if not in a vertical position) and grab hold of the reef or rock if possible.

When being dropped at a site where you know there are currents, ask your skipper to drop you a sufficient distance upstream from the mark. This distance will depend on how long it takes your group to descend — if you do not do this, you will have missed the site completely by the time you reach the seafloor. In strong current, it is often best to enter the water negatively, allowing for a rapid descent and minimizing the chances of separation at the surface.
Above all, remember that diving in currents can provide the most thrilling, rewarding dives of your life. Be prepared, remain calm and never hesitate to abort the dive if the conditions are too much, but most of all remember to have fun!

Originally from England, Jessica first learned to dive so that she could go cage diving with great whites off Guadalupe Island, Mexico, in 2008. From that first shark encounter onwards, she have been utterly hooked on the underwater world, and particularly on the issue of shark conservation. Whilst studying for her degree in London, she worked at London Aquarium, before going to Mozambique to research whale sharks off Tofo. She completed her PADI Instructor’s course while living in South Africa, and spent nine months teaching and guiding on Aliwal Shoal, where she set up a tiger shark ID project and began writing for the conservation organisation Shark Angels. In September last year, she set off on a thirteen month journey around South East Asia, Fiji and New Zealand, and currently instructing in Kota Kinabalu, Borneo.

2 thoughts on “Diving with Strong Currents”