It was a quick decision to revisit one of my favorite destination in Cebu province, initially we were aiming for an offbeat town in Southern Leyte but unfortunately, the lone local dive shop was fully booked for that weekend. We made quick arrangements on our favorite hostel and dive shop in Moalboal but then again, all were fully booked. We ignored the hindrances though, coming to this favorite town southwest of Cebu was a joy. My last visit was yet in June 2014!

The last minute changes made me scrambling from a quiet lunch with friends, it was already past 2pm and everything else went as a whirlwind – tickets, packing, gears assemble, so on.  By 8pm, I was already on board the boat sailing for the night to Cebu.

Travelers always trust things will work out well as you arrived the destination, and it sure did. As long as you are open-minded and make most of what is available at hand. One last bahay-kubo was the lodge  for the night and our friend DM at Cebu Dive Center offered us one dive in their house reef for the coveted sardines run, it was good that one dive guide was available for that afternoon. The arrangement worked well and it gave us time to see other sites.  🙂

For the many times I went to Moalboal, I never got the chance to visit the area and Torsten (of Moalboal Backpackers Lodge) described it as a wonderful spot to relax and watch sunset. It was low-tide when we got there, the shores was wide and long enough for the walk but unfortunately it was too crowded. So, we had the walk, sat at the beach, watch people, watch the sunset and in the end, had a dip and quick swim in its warm waters!  🙂

The town of Samboan is 60 kilometers away from the lodge and almost two hours bus ride, so we woke up early for the trip south. Indeed, the early bird catches the best view! There was no crowd, no noise just the sound of the gushing waters! Yes, the short walk and climbing the four levels was a sure test of agility and strength. I love the early trek and swim at its basin with the majestic falls behind us. It was a wet morning adventure!  🙂

Being with the sardines was a joy! 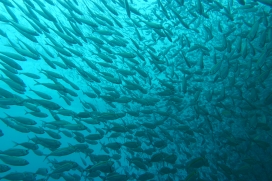 Completely lost in their midst! 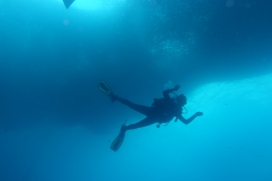 The swarm is getting larger!

DM Cameron (of Cebu Dive Center) was just good-hearted to arrange with another diver for our afternoon dives, one dive was truly not enough for me but it was better than none considering the long trip. The afternoon waters was turbulent as it was moving for the high tides, it was hard to keep steady as we wade for our entry.  At 15 meters though, we had a grand show of million sardines. It clouded above us, as we swam coyly in the warm waters – so beautiful and surreal! It was amazing, a nature’s wonder that can not be explained.  For a time the swarm was in the deep in Pescador Island, but now it’s in the shallows right next the shores. Maybe, the fishes knew that they can survive well away from the predators. Yes, the spot is a protected area and fishing them is illegal! I knew I will get back in Moalboal for the sardines again and again.

The brief get-away was a carouse but never in a noisy and lively way as in a party, but it’s about enjoying nature’s gifts in it’s most simple, relaxed, spontaneous and unaffected way. The wonderful dive was just I needed during the Moalboal visit. After we bade goodbye to our host, we left for the city thankful that our traspo connections went fluidly.

It was late when we arrived downtown Cebu, rushing but still had enough time for a relaxing dinner at La Maison Rose.  C’est la vie!  🙂

NB. All photos courtesy of my favorite dive buddy.

Definitely my madness of Moalboal is unrelenting, it seems I never get enough of its underwater show. For the nth time, I declare that the sardines’ phenomenon is grand spectacle and literally an iconic one. The mammoth shoal is my overriding reason for coming again and again to Moalboal, and I will never get tired of watching in awe while underwater. It is the only dive site in Southeast Asia that is home to a school of fish so immense, it provides a rare and iconic backdrop of shimmers, shadows and amazing shapes. I was in for a show as I float at fifteen meters watching above me. So stunning!

We went again for the 4th time to experience once its majestic display last June, and mutually agreed for another return for this same reason.  Moalboal is a must visit site in the Philippines and if you are after this majestic display of humongous school of sardines, don’t wait long for a trip to this southern town in Cebu. Experience this underwater Shoaltime!

Coming back to this rural town in western Cebu has been planned before I could even return home during a dive trip back in July 2009. It felt like there’s something more to discover in this place, and definitely with only one descent in Pescador Island, the mermaid in me didn’t get enough of its splendor in its depths!  Angel and I promised ourselves to be back…

Our diver’s itch is pestering again for the sardine’s run, such that Angel and I squeezed our weekend for this much awaited return.  I was hoping again to have three dives to make most of the trip, it was fortunate we took the van for Moalboal so we got to the diveshop much earlier as expected.  DM Geom of Cebu Dive Center have set up for us one shore dive in mid-morning  and two boat dives in the afternoon. As there were no other divers it was some kind of exclusive dive for us!

We went for a shore dive on our first descent at the House Reef – DM Geom was firm that I should carry my gears on my back which I don’t really like.   If Mario was there, he wont allow it!  I struggled donning my fins with the tank on my back, and need to hold on with Angel for support.  DM Geom insisted that I’m not fit to dive if I can’t do it, and he is right!

We wade on a sandy slope and went deeper on a wall, DM Geom is so keen on macros so we search on anemones, sea fans and soft corals for critters – minute shrimps, nudis, coral crabs and more.  There were pipefish in abundance scattered all over – big and small ones. Of course the fish life is as well abundant – colorful anthias, sergeants, damsels, wrasses, sweetlips, angels, lionfish, hawkfish, cardinals and banners.  We followed a juvenile barramundi who was camera shy, we found two turtles in different locations who both have remoras on their backs! We were amused with the lavender fat nudis on a colorful coral.  There were gorgonians, soft corals, crinoids – all blended in the reefs.  A good find we had was the thor shrimp near the anemones.

We went back and before we had our safety stop, we found a turtle resting on a reef with remoras on its back.  After 53 minutes with 21.6m as our deepest, we ascend with still 89 bars of air.  Our lunch break at the Little Corner served as our surface interval.

Our second descent was the highlight of the day, this is our main reason for coming back – explore once more Pescador Island!  We are mad about the mystical sardines run – the unequalled wonderful attraction of the island.  After cruising for about fifteen minutes, we descend at the southern tip with a wall, a deep one but we need to maintain at 20m depth.  We were greeted with variety of tropical fishes – variety of anthias, variety of anemone fish, damsels, snappers, lionfish and angel fish.  We went north ward and we sighted squat lobster and nudis – one just need sharp eyes and you’ll always have colorful macros.  Scorpion fish, trumpet and pipefish – somewhere we sighted also a herd of trevally.  All these with a backdrop of soft and hard corals, crinoids, sponges merge together a colorful paradise.

DM Geom summoned us pointing upward – and there, darkened our view above us – million of sardines!  We swam away from the wall towards the run – watching in awe, I went up and down to get near giving me a bad profile. So grand, all them banded together, then two jacks appeared disturbing their line of path. We got back to the wall after the display and went shallower on a slope of reefs for our safety stop.  We found frogfish on tube coral, boxfish and more of the sardines again.  They have really gotten greater in number – they look so magical on the colorful reefs against the sunlight!    We ascend with 50 minutes bottom time, still 70 bars of my air.  At the surface, the waters gone rough already – the sea is enraged according to DM Geom!  He cancelled our last dive in the island and escaped from the raging waters, then speed near the mainland for shelter.

Indeed when we got to Talisay spot, the were no signs of choppy surface – it was so calm, we stayed there for our interval.  We had our final descent at 4:05pm on a sandy slope with variety of corals again, gorgonians, hydroids and crinoids – there were puffers, colourful clown fish and anthias again.  Then DM Geom summoned us for the ornate ghost pipefish trying to camouflage near soft coral polyps – rare find! We found a turtle again with the remora fish on him, handful of pipefish, lionfish, scorpion fish and group of puffers.  The sight of the healthy corals with tropical fishes on it was so calming and relaxing.  We ascend after 48 minutes with 80 bars of air and 18.3 meters as our deepest.

Catching an early fight for Mactan, two hour drive to Moaboal, three great dives in its waters are more than enough for a Saturday.  It was full but so comforting – to unwind a full week at work. It still amaze me that in a real sense, it’s an exhaustive bustle yet at the end of the day, the mermaid in me felt so contented and pleased, unmindful of being tired.  Again, it can never be put in words.

Once more, we are still planning to be back in Moalboal to dive not only once ,but more in Pescador.  Angel and I will be back again for sure.  Now, that I guess is pure madness!