It’s been awhile since my last descent – twenty weeks to be exact, for some reasons, good reasons that is. In my own terms it was fundamental and non-negotiable. Yet my undying admiration for the depths never wane a bit. I was fighting my own demons and trying to fulfill my mission as I simply understood it. I was painstakingly waiting for my next dive trip, obviously I was like a fish out of water!

The merry month of May was just apt, and coming to Romblon was just fitting – it is off-beaten for diving and undoubtedly a good recompense for the abstinence. Angel and I were utterly intrigued with Blue Hole, actually he has been suggesting for a hop to these group of islands for some time.

Indeed, this quiet capital is too good in keeping its secrets. Arriving in early dawn, there was enough time to get some sleep after a long haul – it was a plane, bus, boat rides for me starting my trip in the wee hours from CdeO. The short nap was a good way to start and we needed enough rest for the day’s events.

After a relaxing breakfast, we head for Three – Ps Holiday & Dive Resort at Barangay Lonos, only to find out later that we have to get back at the town, our dive boat was waiting at the pier just near our lodge! We left late as planned, aside from boat preparations our DM was not feeling well. But we were blessed with a good weather, sunny skies and calm blue waters graced us as we cruise for the site in San Agustin, somewhere at north western end of Tablas. Verdant hills and fields and few patches of white beach were in the horizon as we sailed on. We caught sight of two lighthouses, the last one was near in our dive site. We started to gear up as we approached and asked if we could climb up to the lighthouse. DM Peter assured we can during the surface interval, his wife Anne was too encouraging feeling proud as a local.

The light at the end of the hole

I was wondering if a check-out dive would be necessary for me being a deep dive, I was thinking of ear squeeze for sure, again it’s been twenty weeks. Cavern diving is too alluring and it’s not new for me and Angel, the mystery of the dark always held surprises and we found that very interesting. The penetration is always enticing! I was dying for the depths and the smell of sea waters and gears just heighten the thrill. One big step to the waters and we all descend swimming shortly near a wall until we got to the hole, a big wide dark hole but never scary. We went down lighting our torch, there were no fish life or maybe I missed them distracted by its mystery, until we got to the exit unto a sandy slope. It wasn’t long enough to fill my curiosity, which left me wondering the occurrence of the sink hole. The environs were decorated with variety of soft and hard corals, spirals, feather stars, sea ferns/grasses, nudis, anemones, juvenile fishes and more. It was all healthy until we got to a colony of crown of thorns – so many scattered over the corals. Going further, we found more colorful corals and juvenile fishes hovering over. It was all beautiful I can’t put it in words – you know it’s something that sent a flutter in your heart. Our safety stop was spent over a coral area going around until we ascend near the boat after 54 minutes, our deepest at 37.5 meters. 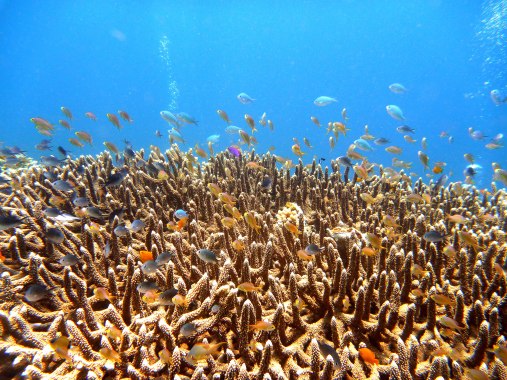 As if these anemones were blooming!

This specie was something new to me!

“You have to swim to the shore, the boat cannot get near due to the corals.” DM Peter quipped when we asked his permission for the lighthouse. Well, we did swim but I need to hold Angel’s hand, to be sure he won’t leave me behind. Our surface interval was spent exploring Punta Gorda – climbing the hill, going around the lighthouse (old one is beside the new) but felt sorry we can’t climb. The place was desolate, but the lighthouse is perfectly functioning – it is one of major lighthouse in the country. We found goats grazing in the surrounding foliage and boats on the shore, for sure there’s a community offshore. We sat on the shore seeking shed from a tree watching the horizons until our DM summoned for our return, we all swam together with his wife back to the boat. Another secret uncovered!

The native kalaluchi was in bloom!

We swam that far to visit Punta Gorda lighthouse! 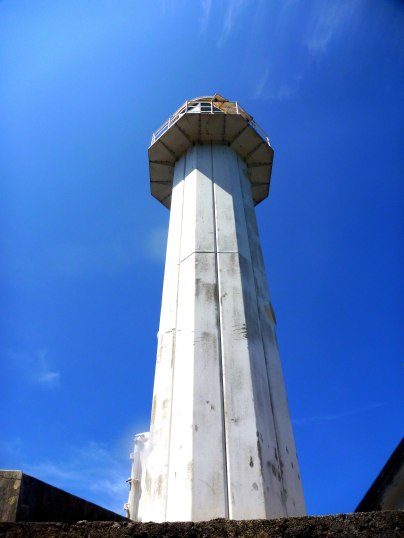 The lighthouse powered by solar energy. It could have been another breathtaking view on the top!

There is something unsettling with the hole, yet when DM Peter asked if we want to do again the Blue Hole, we both opted for another site. Our second descent was still at Punta Gorda exploring a wall, decorated with barrel sponges, knotted fan, sea fans, feather stars, sea ferns, table corals, brain corals, maze corals and anemones. DM Peter examined closely a large gorgonian and found a bargibanti pygmy – so minute I could hardly see it. I caught sight of a clam, some nudis and obscurely a white tip, which disappeared quickly. Again, the environs were colorful and appeared healthy, I guess the area is seldom visited by divers and disturbances are all too minimal. We had our safety stop on a wide coral area going around again in the shallows until we ascend after 67 minutes. Although I refused to be bothered, I noticed earlier that my precious D4 went dead and appeared flooded.

We sailed back to town, wanting to speed the cruise. We need to explore one more secret – the old Fort San Andres and watch the sunset on the hill. Indeed, we did watch the setting sun unwinding on the tiny park near the fort. It was wonderful to cap the day with the calming sight of the golden horizon. But our day did not end there – we had dinner in an Italian deli and had foccacia, home made pasta with meat balls plus fruit shakes. It was more than enough and finished our day with a walk at the old town district. It was exhausting but had lot of discoveries in just twelve hours or so.

The next day, we made the few hours in Romblon productive and unraveled more secrets. Before leaving downtown, we paid church visit in Saint Joseph Church built in 1727, perhaps one of the oldest church in the country. It was evident in the town the colonial Spanish influence – the old church, old fort, old town square, old houses and the historic Spanish bridge in the old town district.

We headed south of town until Apunan Point in Agpanabat, Angel just wanted to see another lighthouse. The caretaker was all too friendly and allowed us for a climb, the 75 feet structure standing proudly with its old counterpart just few meters away. We had a breathtaking view before us – the vast ocean with sunny blue skies! We looked over a string of white beaches we passed from Barangay Palje to Lonos – Talipasak Beach, Marble Beach, San Pedro Beach, Tiamban Beach until Bonbon Beach. The last one is with a sand bar gleaming under the sun, with its end near Bangug Island. There were no crowds, these are the kind that is worthy lounging the whole day – pure and relaxing. Indeed, Romblon is more than just marbles as it has been originally known.

Our DM said, we were lucky there was no current when we got at Blue Hole, there were times when penetration is not possible, surge of current will push divers up not allowing entry. Our experience was never tricky, we all went fluidly and the waters cooperated with us. The God of the Seas was with us again all throughout!

Tim Scott said that there is great intimacy in diving with another human being. Getting back in the waters with my favorite dive buddy was sheer joy. Diving with someone who is a good friend and someone you trust brings shared joy, undoubtedly a reinforcement of the friendship and closeness above water. It was such a reassuring gesture of shared belief and admiration of the depths. The Blue Hole encounter is another mystical moments shared with my best dive buddy.

1. We stayed at Park Bay Mansion – P 750.00 for AC room good for two persons
2. Tricycle can be hired for town tours, we paid P 500.00 round trip as far as Apunan Point in Barangay Agpanabat
3. There are two dive resort in the island, Three – Ps is more convenient if you stay in Romblon town. Diving within the island is cheaper, but if you head for Blue Hole it will cost more due to additional cost for boat rentals going to the site which is one hour away.
4. Word of caution – if your dive computer needs battery replacement, don’t use it underwater. Never!