The island-province of Camiguin is a pear-shaped volcanic island in the northern tip of Mindanao. It is approximately 90 kilometers north of the City of Cagayan de Oro. It is bounded to the north by Bohol Sea, to the west by Macajalar Bay, to the southeast by Gingoog Bay and to the east by Butuan Bay.

This island paradise is inarguably my favorite local destination and as I said, it is so replete to cater for my whims and I have always reasons to be back again and again. My predilection on this island never wane a bit and last December I hit grounds to savor once again its grandeur. A weekend sojourn barely 32 hours yet it renewed my well-being enough to brace me for the year-end hullabaloo.

If you are a diver and you haven’t explored the island’s underwater world, you have missed one psychedelic marine treasures and wonders. Luckily, all our transpo transfers went fluidly and we were already cruising at sunrise watching its golden splendor in the horizon.  Our divemaster was already waiting for us when we got to our refuge in Agoho preparing our gears.  The sun was perfectly shining and the water perfectly flat just waiting to be explored. 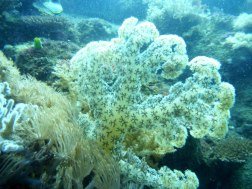 Our first descent was at Old Vulcan, after cruising for thirty minutes. The familiar granite boulders decorating in its front.  The large sea fans in variety of colors adorned the reefs, again I was engulfed in its vastness in a different world of silence. We sighted giant trevallies seven in all, there was even a tornado of snappers magnificently emphasized by surface sunlight.  Indeed there was a variety of tropical fishes colorful enough for my senses – emperors, angelfish, moorish idol, butterfly, spadefish, fusiliers, shrimp fish and assortment of anemone fish. I didn’t miss the triggerfish, and also the turtle swimming away quickly!  We linger in the large colorful coral area taking our time until we had our safety stop before the ascent.

The necessary surface interval was another colorful encounter and it was like shooting two birds with one stone.  🙂  We cruise to the Sunken Cemetery being our next descent, and we swam comfortably towards the Cross marker. I have been wanting to step on the underwater cross marker just at the back of monument. We snorkeled the surrounding area, the wide coral gardens housed also the giant clams and juveniles. Such wonderful discovery!

Back rolling for our last descent, we descend to a deep slope searching until we got to a coral area, There were nudis, feather stars, colorful chromis, damsels, bannerfish, cardinals, hawkfish, angels, clownfish and anthias.  We sighted too a giant puffer, a banded seasnake wiggling coyly searching for food perhaps.  We didn’t miss the cross markers, we found two just like last time, but more corals have tangled around almost covered now.  I hold on to Angel while having our safety stop, just too famished to steady my buoyancy.  🙂

The God of the seas and weather was with us indeed, the warm sun and the flat waters felt like it was summer.  The perfect weather prompted us for more, to drenched in its beauty and seizing moments while being offered freely.  We rushed off to Yumbing, the drop off point for White Island hoping to find a cheap boat for the round trip cruise.  The sandbar is not always accessible even on early mornings. Last September while on official trip, the cruise was restricted, the waves wasn’t cooperating and we felt dismayed. Our visitors from other regions was just eager to experience the sandbar.  We were fortunate enough, a Spanish couple offered us to join them for the boat ride, at first the operator was hesitant since we were staying in a different hotel. But the Español was too firm and argued for us! Sometimes you don’t need to fight for something if it is really meant for you.  🙂 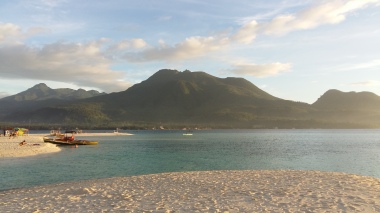 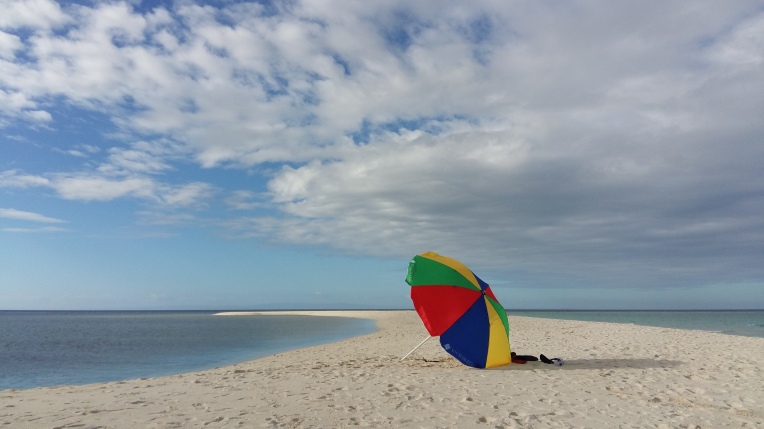 The white island was beckoning as we cruised in the afternoon sun, we were excited for the sunset! It was a perfect unwinding after our two dives, just soaking ourselves in the shallows biding our time.  There were few people, the waters calm in low tide and the setting sun was the ideal backdrop of the scenery! 🙂

The next day was all riding our way to the two falls we have planned, but we attend mass first in Mambajao church. We dashed off after a hurried breakfast over a motorbike, the driver served as our tour guide as well. Katibawasan Falls is still beautiful but didn’t tried to swim, we feasted on the kiping instead.  🙂  Tuasan Falls was something new, it was a longer ride though, but the roads were completely paved up to the entrance.  It is beautiful also, its catch basin was big enough as a pool, got a dip but didn’t linger long the waters was just too cold. But soaking in its cold natural waters watching the gushing waters was perfectly refreshing!

Coming to Camiguin in December was an ideal year end get-away. We are coming back for a summer trip to explore off-beaten corners of the island.  As I said, there is always a reason to be in Camiguin, again and again and again!