Indeed, there are 101 ways of enjoying the wonders of Camiguin Island and maybe it would be too archaic to say I am one of many who are captivated by its enduring charms. I will never get tired of coming over and over again, last year I hopped to the island three times each with different agenda to relish once more its grandeur on its surface and beyond.

White Island obscured yet like a gem in the blue sea!

Ferns & more foliage in the forest!

During one long weekend in summer I went with workmates to fulfill my long-time wish to climb Mt. Hibok-hibok, the trek was unforgiving but I made it traversing to Ardent Hotsprings. It was just marvelous getting up close with this majestic & dangerous mountain which have devastated the island decades ago. My legs went wobbly when I got back in the camp but happy for it was a wish come true!

In June during an official travel, after having a road tour with staff and workmates, I had a quick detour for a weekend dive with my dive buddy. It was rediscovering the island province, surface & beyond.  And yes, after the dives in Mantigue Island we went up the mountains for the trek to Binangawan Falls in Sagay.  We went for the unforgiving trails but the feeling was great when we got there, it was deserted compared to Katibawasan & Tuasan Falls! The trek was engaging, one mistake and you fell into the ravine.  The waters was too cold, just right to cool down after the long and challenging walk and it was all ours!  🙂

I went back to the island for my year-end dive and the weather favoured us, while other regions was on a storm it was like summer in Northern Mindanao.  We aimed for Mantigue Island, we just couldn’t get enough of the school of giant trevally and huge turtles. I never get tired of coming back again and again, the point is – we only spent brief moment underwater which is usually an hour at a time, and the probability that we will see everything in that moment is nonsensical. Exactly, different sightings in every descent. Yet if I’m in Mantigue waters, I waited for the turtles and the large herd of jackfish or trevallies. I wished to be in the midst of these numerous silvery fish with big eyes and swim with them or be engulfed in their swirling motion completely at peace.

A throng of giant trevallies! 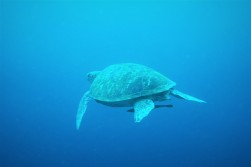 New sighting of this nudi specie 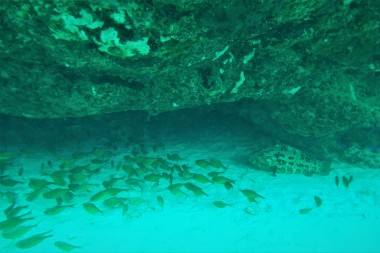 Cardinals & goliath grouper in a cavern

Once again we encountered my favourite species – the turtles, giant trevallies, garden eels, stonefish, giant grouper (like a goliath!), sea snake, moray eel, few nudis and unexpectedly – a herd of barracudas! We bumped with the trevallies at least three times as we went around. We stumbled upon a reef decorated with feather stars, soft and hard corals and hydroids formed like a heart – amazing discovery! 🙂 Angel tugged me and pointed it out while floating weightlessly.  My two dives on that Saturday have refreshed me undoubtedly after just recovered from feeling ill.

It was drizzling when we head for the white sandbar in Yumbing early the next morning, a storm darkened the skies followed by rains, but the sun peeped after awhile and suddenly brightened up the horizons.  It’s been long since I last set foot in the sandbar, then a rainbow appeared and it reminded me of a promise from the heavens, a magic to behold sending good cheers!

Camiguin always fascinates me in every way, the island is purely magical – surface and beyond.

NB. The split photo of Mantigue Island is courtesy of my dive buddy.