In November, we head southeast down Misamis Oriental and revisited Duka Bay to relish once more its impressive depths. The bay has been a favorite back when I was just starting my dive pursuits.  It is just few kilometers from  Cagayan de Oro and I have good friends managing a diveshop in the location, this was my playground during my advance open water (AOW) course. The local government also exerted efforts for marine conservation and preservation – marine sanctuary maintenance, installation of artificial reefs, coral restoration and dive clean-ups.   Their labor was intensive and the support for them was gratifying. The site is practically a good destination for weekend get- away.

The weather cooperated with us on that Saturday morning when previous days it was pouring hard, mysteriously the viz was good enough for our dives. There were no other divers so it was again an exclusive one for us. Edward, Jolem, Badette and Lemuel of Duka Dive & Aquasports were there for us.

We were aiming for Mother Mary’s statue which is something new in Paradise, it was planted early in CY 2017 and has become an attraction in the bay. It was our first stop, she was there standing in the middle of white sandy slope away from the crowd. So alone, so serene. It reminds me of MUSA in Cancun, Mexico – but with only one statue it is a far cry. Marine critters started to inhabit the statue, actually promoting coral life.  We proceed to that big crater full of tropical fishes, I positioned in the by-side, paused and watch in awe the busy stream of resident fishes swimming, darting, wiggling before me. We passed alibuags sending shivers as it was too cold to ignore.  Duka is famous for these fresh water springs underwater, how uncanny nature is!  There was a parade of giant snappers and a big turtle appeared.  We entered a small cavern full of golden cardinals, swimming madly as we got near! The area is now more full with soft & hard corals, decorated with crinoids, whips and other invertebrates.  Still a paradise, as it was! 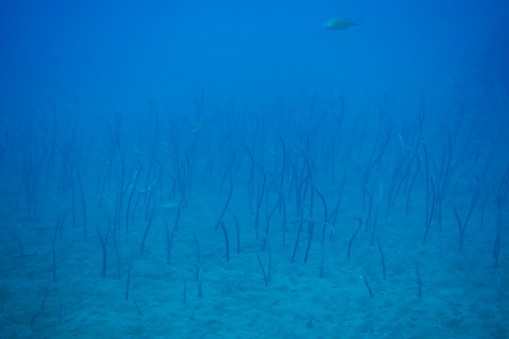 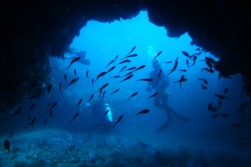 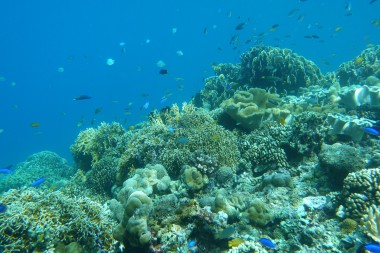 Our last dive was at the Aquarium with an inner reef for the wide coral field and outer reef to the deeper part of the site. We descend on a sandy slope unto a large colony of garden eels, so many of them! And again, I linger for a moment to just watch them come up from their burrows inch by inch.  Their shyness is endearing! There were lot of tropical fishes in variety, few nudis and a cluster of giant clams.  We found too stonefish and a juvenile yellow frogfish.  We roamed around the coral fields, biding our time and watchful for critters.  There were alibuags again scattered, and true to its name as it was before, it is indeed an aquarium!

Just marvelous, the bay can never be outdone in its diverse marine life, and coming back after some time with a deluge of sightings was refreshing enough and brought back memories how replete this once my playground in the early days!

NB.  All photos courtesy of my favorite dive buddy – http://www.lakwatsero.com! 🙂