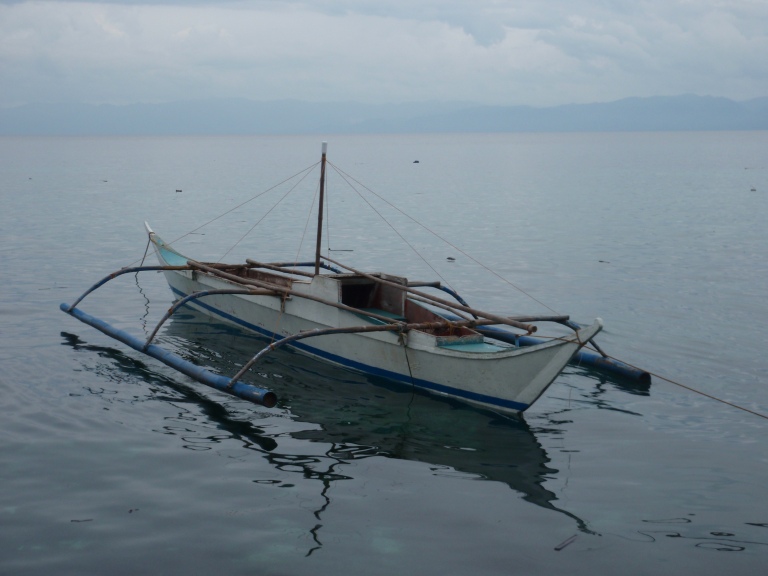 Having a 4-day weekend was perfect for an out-of-town trip and since there was an invitation for Dumaguete, I was overwhelmed and planned for a dive trip in Apo Island (one dive site in my wish list!) plus a possible cruise to Siquijor. It was such a perfect escapade!  🙂

I sneak from the Independence Day celebration before it ended to catch up with our boat going to Cebu, leaving at 11am in broad daylight is new to me. Night boat trip for Cebu is the usual thing.  It was drizzling when we got to Pier 4 arriving at past 6pm, we hastily get off as we still need to get tickets for Dumaguete.  But alas, when we got to George & Peter Lines, there was no available trip for the night!  I need to be at Dumaguete before 8am, so our only alternative (after calling a friend) is to take the bus to Santander and cruise from Liloan to Sibulan, Negros Oriental.  It meant only 2 hours of sleep, since we need to get the 1st trip at 3am to catch the 6am fast craft to Sibulan.  Well, this is an adventure, surprises may come and an open mind is necessary to adjust to situations such as this.  Our refuge for the night was at guest house of DA 7 Regional Office, I was just thankful that I have good friends I can count on especially for necessary arrangements.

We started early so we could catch up the schedules, we cant afford to miss the bus consequently the fast craft.  By God’s grace, we arrived perfectly at SPUD compound almost 7am and was welcomed by the sisters.  We joined breakfast with Fr. Roman – a fun loving, articulate and friendly chaplain of SPUD. We learned that the sisters have arranged already for Siquijor cruise that day, it meant I’ll miss the trip since I have to go for my dives.

We hurried off after our breakfast, as the diveshop will picked me up at 8am (I need time to get on to my contacts, whew!) and Ate Inday with the sisters will take off for Siquijor hop.  Sir Snoopy informed me that  Justin will fetch me at SPUD gate 3, I was eagerly waiting while talking to the friendly guards. Finally, they arrived (a white multicab with tanks at the back – as Sir Snoopy described) , so I joined them and tried to talk with Justin about the trip. I was up for surprise no. 3 – he informed me that we’re not diving at Apo Island! 😦 So I keep my cool and go with them – I was bit disappointed since I have been dying for Apo Island.  We arrived ahead at the site, then DM Alvin arrived with other divers. There were two couple divers and I ended up with Justin as my buddy.

I was asking if we’re going on a boat, but DM Alvin said all our dives will be beach entries – well, it would be another lesson to learn!  Dauin Car Wreck – our first site to explore, the weather was good and it was too perfect for underwater escapade.  Dauin is one of the coastal municipalities of Negros Oriental with community  –  managed environmental protection and preservation.  I wasn’t surprised when Alvin told me that wearing gloves is not allowed.  😛  I was thankful that Scuba Ventures has the same professionalism as with other PADI dive shops I encountered with, Alvin and Justin was friendly and helpful.  I need their assistance for doning gears and carrying to the water.

Imagine white sands, turquoise waters and sun brightly shining – then we got deeper and their lies the wreck, the body and axle separated,  but lot of fishes hovering on it, colored corals covering it.  Lion fishes, anemone fish, scorpion fish, sea horse, ghost pipe fish.  We’re hoping to find the frog fish but wasn’t around.  I keep following Alvin, frequently glancing Justin as I go through enjoying the site.  Until DM Alvin signaled for us to surface, after we played with the two seahorses while our companion tried to take video,  during our safety stop.

We get off and took our early lunch in one of the carenderia near the police station, and as usual I choose to eat little and got bas-oy veggies (squash, malunggay, beans).  I joined Justin and Alvin while the two couples in another table.  We left for Bacong, as our appointment for DUCOMI pier is at 12 noon.  Under the blazing heat, we went to beach near the pier.  I was wondering what the pier could offer underneath, I was bit excited.

We swim again on the sandy shallow area until we went into the drop-off, then going to the pier area directing to the concrete posts.  All covered with colored soft corals combined with abundant fish life, then sunlight shining through – what a sight!  It’s a forest-like scene, a forest under the water!  Lion fishes, bat fish, angel fish, puffer fish, anemone fish, clown fish, nudi branches among others.  We circled around, up and down enjoying the marine life. We spent an hour floating, going around enjoying the scenery – in silence – so beautiful!  We swam back to the beach, in disbelief that it was already an hour passed.  We get into our transpo and left the place with the other divers as Justin was going the other way. I got the chance to hop from one resort to another with the divers going home.

I joined DM Alvin to the dive shop hoping to meet Sir Snoopy or Ms. Percy but they were not around. Well, I need to pay my fees and wanted to see Scuba Ventures Dive Shop.  We went to drop off  a couple at Bethel Guest House along the famous boulevard of Dumaguete.  They finally drop me off at SPUD gate no. 3, home at last.  I arrived early as expected and was able to take a rest after shower and washing my gears. It was such a long day!

The next morning we attended a Sunday mass at the university chapel, then have a sumptuous breakfast later.  Sister Luz have arranged for our city tour:  Silliman University, Boulevard, down town looking for souvenir shop, take a snack at a shop, National Bookstore to buy card.  Then we rushed back to SPUD for our lunch as instructed  – well, sisters have that kind of lifestyle, everything is structured and you need to abide with it. 😛

Our afternoon outing is also structured, we need to get back at 4:15pm (not 4:00 or 4:30!) because we will attend a dinner party with the nuns.  We thought  that we will go alone to the Our Lady of Gardens but Sister Luz joined us!  Anyway, we went to Sibulan for the Gardens and enjoyed the overlooking view – so breathtaking!  We went back to the city as it started to rain, and went to pier to buy our Supercat tickets for the morrow’s trip back home.  We joined the sisters later at the dinner party and was too full when we got back home. We made one last round at the boulevard by night before we finally settled that night.

After our final packing the following morning, we attended mass at the sisters’ convent, then have our breakfast again with Fr. Roman – again I was enjoying his stories, he’s so fun loving and so articulate.  We hastily left for the pier after bidding bye to everyone,  and get into the Supercat for Tagbilaran.  I promised myself to get back to Dumaguete for one reason:  to dive at Apo Island  with Angel hopefully soon.

After two hours, we had a stop at Tagbilaran and left  for Cebu afte about 30 minutes.  We arrived at the Queen City of the South a little past 12 noon. We went directly to the Travelers’ Lounge, bought tickets back for CdO and had our lunch as we get famished already.  I was hoping to get a chance to visit the Sto. Nino Shrine but Ate Inday was too tired for a downtown tour, so we stayed at the mall and went to Powerbooks instead. I was overjoyed because I finally found French Woman for All Seasons in paperback and at a discount!  🙂 We went back to the Lounge and took some break sipping cappuccino and started to read my book – well, this is life!  🙂

We finally went to Pier 4 for our boat, and settled in our cots.  We took our dinner at the boat’s café and settled for the night as I need energy for the morrow as I have to get back to work.  We will have a project meeting (11am) and I have some presentations to make…  We arrived too early the next morning thankful as I have enough time to prepare for the day’swork.

Another journey ended but then again, it brings smile to my lips.  There were lessons learned and surprises that came along, making it a trip to be remembered.  There’s always that feeling of newness every time I got back from a trip.  I promised myself another Dumaguete trip to dive In Apo Island hopefully soon, and without doubt not missing a Siquijor hop next time! 🙂

One thought on “Trip to Dumaguete…”