The water was all greenish due to plankton season…

Wake up early and sneak away from home  hoping to catch up the 7am bus to Medina but miss it just about a minute, I saw it speeding  away as I got out of the taxi! So I waited for the next aircon bus and arrived at the diveshop  almost 10am.  I was surprise that there’s no other diver guests but just intimate friends and cousins of the Jugador’s,  but it’s good to see Mario and his wife, Ma’am Cristy.  I hastily dressed up and prepared, obviously the group have been waiting for me and I felt guilty about it.  😦

The guys went up in another boat for another spot for their game fishing, while I went with my mentor and his wife for another spot to Acanthasia for our fun dive.  Just like my previous dives with my mentor, I’m all too confident it’s going to be effortless and safe descent in his territory at the bay.  The waters was bit choppy, and was all greenish due to the plankton season as explained by Mario.  So the visibility was poor, it was all hazy. But I was all forward looking what to discover for my cam, I need to learn more with the adjustments to get better photos underwater.

We descend at 60 feet as deepest to get around in the sanctuary, I felt overwhelmed with the fishes getting near, suddenly the scene went lively as we fed them (sorry, again!). So near I wanted to pet them with my hands, but they’re so quick and mistakenly bumped my hand!  I just watched them in awe and grateful for the chance to get close encounters like this right in their own habitat. We went around following Mario while taking photos until we lost Ma’am Cristy.   I stumbled upon a reef with crinoids, colorful corals and anemones and stop for some shots, only to find out moment later Mario was gone!  I went to follow his directions but decided to get back to the reef hoping he would try to look for me.  It was heart pounding to be alone down, I was trying to think my next move when I noticed a camouflaged colorful scorpion fish right in front of me!  🙂  If I didn’t get back to the reef I wont get the chance to see this rare specie. SRTA – I decided to head the beach direction to get shallower as my air is getting down.  Slowly I surfaced with my air at 500psi, about 60 meters away from the boat! 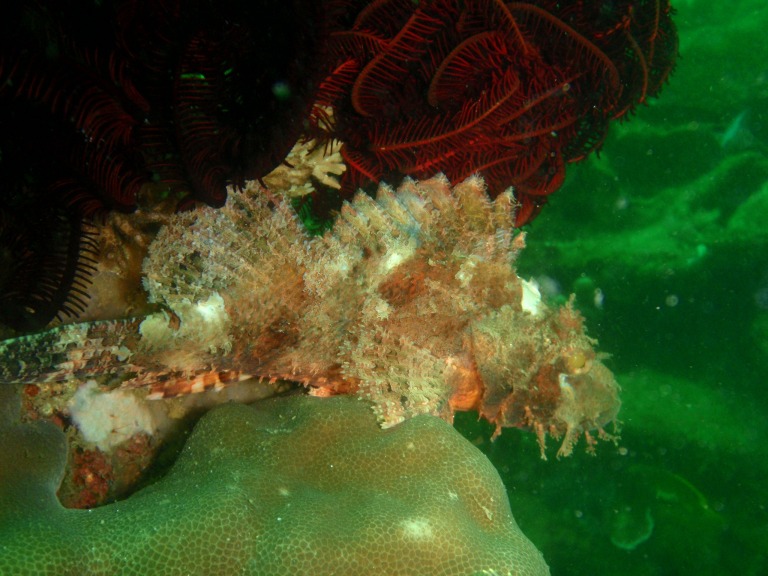 I found them waiting for me including the boys handling the boat, I sensed Mario was bit annoyed with my getting lost, I could see it on his face – but surely the Lord will keep me unharmed!  I told him calmly that I found a scorpion fish & took photos – feeling like a guilty child caught in the act!  Lesson:  don’t expect your companions to look for you down as their air could be limited, ascend safely and in such situation do SRTA always… We get back to the shop and found that the guys had a big catch – a 12 kilo giant trevally! Amazing, we had a sumptuous lunch later…

Our second descent was at Paradise – the spot of the cold alibuag, the waters get choppy and our small boat was rocked by the waves.   Mario told me to have Ma’am Cristy as my buddy, careful not to be separated and not taking chances he got Gonz as our companion. We got to the alibuag again,  the cold fresh water was so cold and I swam over it again and again, and watch the pelagics passing by. The waters were still all hazy but had great time taking photos of the hard and soft corals I stumbled upon.  It was all uniquely shaped with unmatched hues!  Mario and Gonz carefully watching over us. I felt some bit of current.  Then, we get back as my air was down to 1000psi and prepared for our ascent, and found out as we surfaced that the sea calmed down already.  We went 80ft as our deepest – 20 feet deeper down than our first – which is actually against the rules!  🙂

After some pleasantries and consultation from my mentor and reminding him of the Tubbataha Dive plans, I left the shop but not without having me brought to the bus stop by Gonz & Edward. Riding on the bus heading home for Butuan, I was reflecting on some lessons for the day’s events.  Sometimes, the Lord allows situations when we felt helpless and vulnerable, not to harm us but to learn something valuable and important. I learned to find my own way and ascend alone unharmed and got delighted as I stumbled an elusive rare scorpion fish by myself.  And Mario is indeed a good mentor (actually he was annoyed with my mistakes but handled it well!), he can always be depended on in my diving lessons needs and concerns.  The Lord always made things perfect for everyone  everytime – especially on valuable stuff that warms your heart!

But just now, I can’t wait for my next month’s dive trip with Angel at Sogod Bay!  Patience, patience… 🙂