An off-beaten site, I haven’t even heard or read about the spot and we only knew we were going there when we were already on the boat for our scheduled dives.

“Where do we go today? Asking in wonder our DM, whom we just met that morning.
“To Pearl Island!” He blurted briefly with no further description about the mysterious island.

It is just one of the islets off Guiuan, Eastern Samar and coming to this town was just a detour when Biliran province was just hit by typhoon. The lone dive shop in the province cancelled our weekend dives accordingly.

The morning skies was down cast and I was crossing my fingers the waters would be considerate enough for the dives. We were fortunate, Angel found a DM on the web who accepted our last minute booking. Guiuan being hit by Yolanda (in November 2013) was still picking up pieces from the havoc and finding lodgings was also hard, but thankfully we found a home stay at Barangay Hollywood. The town is not in the diving map and definitely not yet in our list but it was more than a blessing we had what we need for that weekend getaway last July.

The waters was bit choppy and the cruise took us an hour but the aqua marine hue of the surrounding waters and the prospect of the far-off island slowly getting near was a real treat to perk us up. But seeing the place as we step on its shores was heart-rending – total wreckage was overwhelming. The three white dogs and the caretaker welcomed us warmly, enough to soothe the pain I felt watching the miserable state of the station. 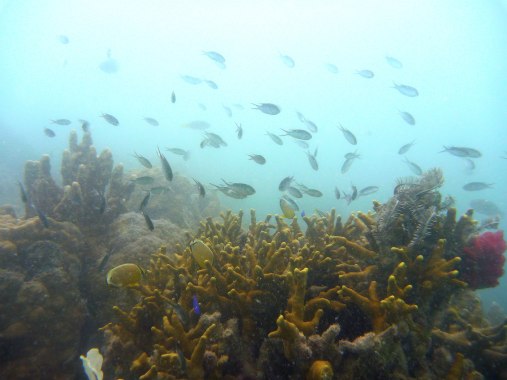 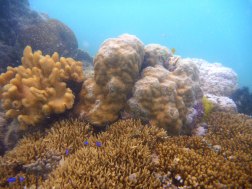 The sky was still downcast and the visibility was not favorable but hoping for surprises in our descents, we geared up leisurely for our first dive – it was a shore entry but somewhat tricky as the viz was hazy. The plan was to circle the islet swimming with the current hoping to cover the whole sanctuary. There were variety of soft and hard corals with juvenile fishes, I needed to be more keen for critters. But what I saw was more wreckage – uprooted talisay tree, broken coco trees, galvanized roofings, rubbles and more. There was more debris than marine life as we went around. Inspecting closely a crevice, I found a lobster, its antlers swaying slowly outside the hole. She stood her ground as I came a bit closer beckoning Angel. It was a rare find and quite a surprise, it was my first sighting of a big lobster! We roamed around over a coral but in a twist of fate, I was separated from Angel and our DM, the obscure viz was not really a help. I surfaced about 15 minutes later than them….

For sure, there was still more to explore down but the DM beg-off for the second dive, it would be rude to demand from him as he was feeling sick. 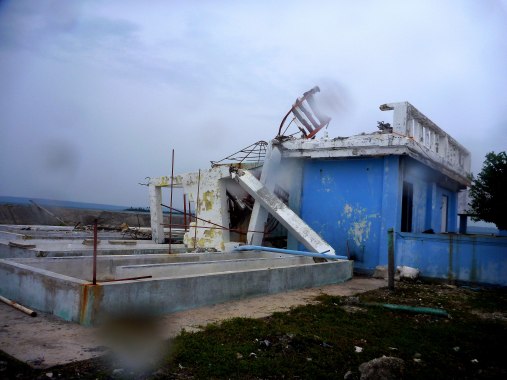 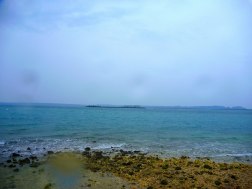 The devastation of the town was fading physically barely noticeable in one glance but visiting the island could pierce one’s heart, the BFAR building was totally destroyed, rows of concrete beds for the pearl culture was empty and useless, coconuts and talisay trees uprooted. It is almost bare to the ground. The lash of the unforgiving typhoon was evident even underwater. Exactly the small islet was an exact show window of the Yolanda devastation.

Perhaps, there will be another chance to visit Guiuan, by that time the town is booming & blooming and the typhoon destruction will only be a faint memory.

1. Pearl Island (aka Kantican Island) is an experimental station of Bureau of Fisheries & Aquatic Resources (BFAR) on pearl culture, at the same time a protected marine sanctuary. It caters as venue of seminars, training and workshops of the province. It was established and a gem during Marcos era.
2. There is no commercial diveshop at the moment but can book diving services from a local DM. Bringing own gears would be advantageous.
3. Aircon vans from Tacloban to Guiuan (and vice versa) have daily regular trips every hour, travel time is two hours.
4. There are more than 10 dive sites in Eastern Samar including Homonhon Island.

I savor few moments on the swing under the talisay tree (survivor after the typhoon) just before we left the island. Despite the devastation, there still a little source of simple joy for a sad soul. Angel was worried to death when he surfaced and cant find me.

3 thoughts on “Diving in Pearl Island”