If you have dived in Sarangani Bay even just once, chances are you would plan to come back. And that exactly what happened last year, my first dives in 2016 was in Tinoto Reef and accordingly ended with the same spot at the close of the year.  It was not planned but things just fell respectively, as I was having an official trip in Davao, we seized the opportunity to be in Maasim for our last dives of the year.

So, after my work meeting in Davao I went straight to General Santos for a day break to loosen a bit before our dives. This trip was just perfect to calm me down from the brain wracking sessions in the past days.  My dive buddy caught me up early dawn next day, having few hours too to rest before we head for Maasim. We were expected at 830am in South Point Divers housed in Lemlunay Dive Resort.

It took us an hour by van to the dive resort and DM Arthur was already waiting for us, and it turned out to be an exclusive dive for us, there were no other divers for the day! The resort was just a perfect haven to relax, so homey and not crowded.  Our DM turned us over to Nolan who was our dive guide also in last February dives.

We went down from the steel staircase and geared up down before the waters, it was high tide and it’s more manageable kiting just before swimming down.  It was a shore dive and it felt good freshening up as we wade until we descend. And again, we joined our friends – anthias, angels wrasses, triggers, damsels – such active fish life. There was an abundance of bubble corals with glass shrimps and crab lurking in between. It was

interesting that critters live in commensal with each other. There were nudis too and the most striking was the yellow bananas, there were at least three we found – real big and fat!  There was a stone fish silently waiting in the corner for a prey, the clownfish playing hide & seek over the anemones. There were more corals, wide seafans and thick bunch of whips. I found a brownish sea cucumber and observing she was defecating, I guess its wastes become sand dissolve in sea water! We went round until we finished off in a sandy area with kelp forest alike passing those brownish sea grasses, sponges and soft corals.  We lingered for our safety stop and wade and had our ascent few meters from the stair case, back where we started off.  I still had 70 bars after 46 minutes with my deepest at 31.5 meters. 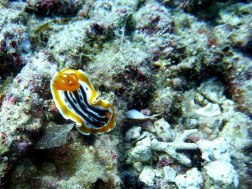 We had a long surface interval just lounging at the poolside. We didn’t take lunch as we were thinking to find a nice café in the city.  The infinity was so relaxing, the blue waters both from the pool and sea below was calming enough. We had our second descent past 1:00pm, we went down again but this time we took a small speedboat that brought us a bit to the east side. We sank down unto mounds of concrete artificial reefs, it’s good to see them again. Such an awe watching them with marine life depending on them as shelter, some of which are almost covered with corals and have fossilized.  The active fish life engrossed me again as I wade along, watching them wiggling around me was truly

calming. There were variety of corals, hard and soft decorated with crinoids and hydroids adding colors of the scenery.  When we got to a sandy area, Angel pointed out something and it took me few moments to see the garden eels before us, I smiled watching them from afar.  We found nudis too, blue ribbon eel and banded sea snake.  It is seldom to find a ribbon eel and lingered to watch its wide mouth opening, perhaps for food? Then as we went shallower in the sandy area finishing off our safety stop, we found something brownish moving with the currents, it looks like a pair of dead leaves. I hastily took photos wondering what it was, when we surfaced later our dive guide Nolan informed us those were ghost pipe fish. So amazing, their appearance was a perfect camouflage!  We ascend after 51 minutes with my air still at 90 bars my deepest at 20.9 meters. We cruised back to the stairs of resort feeling glad of all our sightings!

My two dives on that day was a perfect de-stressor for me, feeling light hearted as we packed our gears preparing to leave the resort. Lemlunay is an ideal get-away, so homey and never crowded.  Indeed, it is such a paradise and definitely worthy for another visit.  🙂

Even marine life has its own way to display, in accord with holiday season. Reef systems most often gather various critters which  obviously offers a colorful milieu. I was quickly passing over a large rock coral with these colorful  worms, miniature tress sprouting all over. Such a wonderful sight, prompting me a smile. 🙂

My passion for the depths urge me again to make room for my last dive of the year. All the hullabaloo didn’t keep me tied, and again prod the inner mermaid in me to disappear into the depths, to another world.

Holiday cheers to everyone!