The friendly domesticated whalesharks in the waters of Tan-awan in Oslob town have drawn so much curiosity from tourists, foreign and locals alike. In short, all people heading to this town in Southern Cebu are in search for the gentle giants. This once sleepy town is now bustling with travelers and obviously economic activity flourish, thanks to the biggest fish!

This coastal town however, has a more than to offer in terms of marine life and that’s where we set out in July for a dive trip. We arrived aboard a bus from Cebu City filled with tourists, all of them aiming for the whalesharks. My blue diver heart cried  in protest for this unethical and disrespectful interaction with marine life. They are supposed to be in the wild swimming in the depths.  It was so pathetic…

If you have traveled down south of Cebu, you will never miss Sumilon Island along its coastal road in the southeastern tip of Oslob. It is a 24-hectare (59-acre) coral island off the coast of Bancogon. It is the first marine protected area in the Philippines; created as a marine sanctuary in 1974 under the guidance of the Silliman University Marine Reserve of Dumaguete City in the nearby province of Negros Oriental.

We arrived early at Brumini Resort, earlier as expected by our DM and we still had enough time for coffee to perk us up after our sleepy bus ride. It was another exclusive dive for me and Angel, no other divers for the day since everyone was out for the whale sharks!  We set for the island a little past 8:00am, unfortunately the picturesque sandbar I was hoping to see was nowhere, it was high tide then.  Not far were trigger boats heading for the whale sharks point, not one or two but many!

Our first descent was in Landscape Coral, some sandy slope hosting a variety of tropical fishes such as anthias, groupers, goatfish, herd of bannerfish, butterfly fish, triggers and more. Surprisingly, a black tip shark appeared vaguely from my point! A herd of mackerel neatly piled themselves and paraded before us, such a sight! And there was cuttlefish and as I slowly came near hoping for photos, it swam backwards curiously watching me. 🙂  The golden and blue anthias wiggling over corals were so engaging, watching them silently was perfectly calming.  Then, as we float weightlessly, something unusual came floating towards me, I almost wanted to reach out to touch. It was a transparent specie appearing in shape of fish, floating and just drifting though the waters, it was a strange encounter!  We drifted until we got to a wide coral field, the current becoming intense when we got in a corner to the depths. We finned endlessly as we slowly ascend watching the coral field, holding hands to be sure not to be separated as we swam back for the boat nearby. 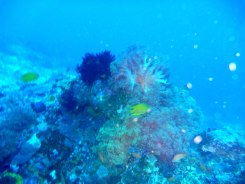 We asked our DM to have our surface interval down the waters over the sandbar, if it was low tide we could be walking on its white sandy surface or just lounge on its white beach. There were lot of people on the waters as well as in some kind of waiting shed in the rock cliff, for the guests I guess. We tried to gather the trash floating before us brought in by the rising tide, if only all the people out there could take one trash at a time, it will be free of all the eyesore in a flash.  If only…

Our next descent was in the marine sanctuary, which was again perfectly rich with diverse marine life.  There was trumpetfish, silver jack, triggers – well, I was eyeing with the titan trigger making sure I won’t attract his attention! 🙂 The golden and lilac anthias were there again contently wiggling over the green corals. There were bivalves also, barrel sponges, cucumbers and colored anemones.  The giant sea fans in yellow and blue also decorated the area.  The banded sea snake slithered along perhaps looking for prey.  We passed crevices and overhangs curiously looking for macros. I found four nudis in just one location, perhaps they were a family.   I sighted boxfish, puffer fish, goatfish, banner fish, moorish idol, angels and damsels.  I sighted also a herd of sweetlips swimming coyly, so absorbing just watching them.  We got to a wide coral area for our safety stop curiously hopping around.  After 48 minutes, I still had 120 bars of air when we ascend.

Getting into the depths is far better than feeding and swimming with the whale sharks on the water surface.  The depths of the island or Oslob for that matter, has much more to offer.  Apparently, Oslob is more than the whale sharks, its depths held much more interesting marine life!  As we rode our transpo going further south, I was reflecting how long can they sustain the poor butandings entertaining numerous people everyday. This practice has greatly disturbed the ecosystem.  I wish the people of Oslob reflected on this…

Will you interact with Oslob whale sharks this way?

It was a rare encounter while we were diving in Sumilon Island in Oslob, Cebu. It happened quick as I have seen something transluscent floating towards me. Watching and wondering what it was, I managed to snapped few photos.  Almost tempted to touch the specie, I changed my mind thinking it might some kind of poisonous.

Searching some materials revealed this mysterious creature. Salps may look similar to jellyfish, but they are more closely related to marine vertebrates including fish.

Although they are mainly transparent, the bizarre creatures have gills and a heart. Like other tunicates, their bodies are encased in a sac-like structure, which has an opening at each end. As water pumps in and out of the openings, or siphons, Salps are propelled through the water. Filters inside their body sift through the water and collect their food, which consists mainly of algae and phytoplankton.

As reported by Plankton Chronicles, Salpa maggiore can grow to around 10 inches long and often travel in large groups, or chains. As they are asexual, the creatures are capable of producing their own offspring to form the massive chains. While part of a chain, salps use electrical currents to communicate and synchronize their movements.
Read more at http://www.inquisitr.com/1104937/salpa-maggiore-mysterious-translucent-fish-identified/#wtSSJjslXOOHrOD9.99

It was surprising to find one in waters of southern Cebu as they are commonly found in cooler waters of the Southern Ocean. It was my first time to find one after diving some time in the Philippine waters.

Have you find this specie whilst diving or snorkeling?